I just opened an Israeli bank account, and my new name is: בריאן אנטוני בוקולה. Woohoo! Here’s what’s going on:

Funny story: The clerk at the bank actually transliterated my first name slightly differently: as בריין instead of בריאן. That is, א (aleph) became י (yod), giving rise to two י’s (yods) in a row. (At the time, I didn’t notice… I was just signing papers left and right.) Now, י is normally pronounce [i], so at first I thought that people reading בריין would say [ˈbriʔin] (BREE-een), with a glottal stop, but Hebrew actually has a way to indicate a glottal stop, e.g. א, so on second thought that seemed unlikely. In the end, I hypothesized that two yods was the clerk’s way of indicating a non-Hebrew a diphthong, e.g. [aɪ], as in [ˈbraɪən]. This hypothesis was confirmed when, later, a friend told me that בריין is exactly how he would write [breɪn], i.e. transliterate the word brain.

Bonus: A picture of the name plate on my and my colleague Andreas Haida’s new office. (Ignore the misplaced dot.) Notice that Andreas’s last name, which is pronounced [ˈhaɪdə], has a double yod, so here’s another case where יי = [aɪ]. Notice also that Dr. is ד״ר. The thing between ד (dalet) and ר (resh) is not a double yod or anything. It’s called geryashim—or double geresh—which is a special symbol that indicates an acronym and other short forms. 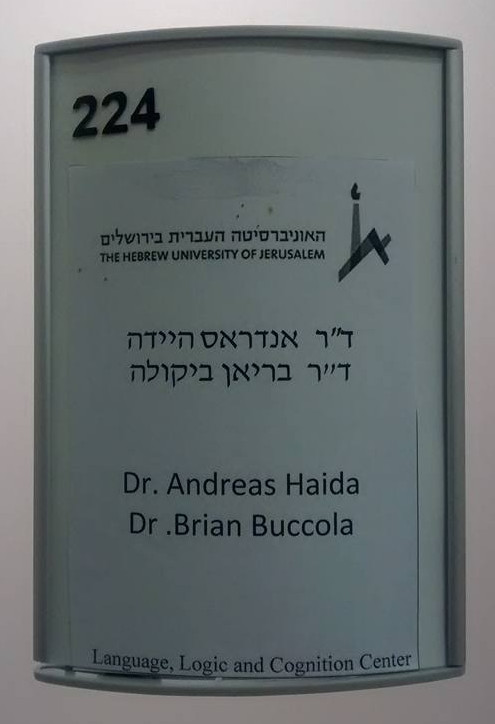